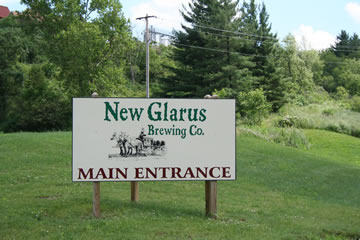 New Glarus welcome sign as you turn into the drive.

A stark contrast to the Chicagoland area, the drive to New Glarus, WI is full of rolling hills, windy roads, lots of farm land, cattle, sheep, horses, and the token driver that likes to do 10 mph below the speed limit where it is impossible for anyone to pass. The ride is pretty, peaceful, and has points when you can see miles from on top of a hill.

With dumb luck on our side, we were able to see the new brewery that just opened to the public last weekend (June 13, 2009). There was the definite scent of newly finished and painted drywall as we winded from the souvenir shop to the self-guided tour in the brewery. There were a few New Glarus personnel in the brewery to answer questions on this no time limit stroll. 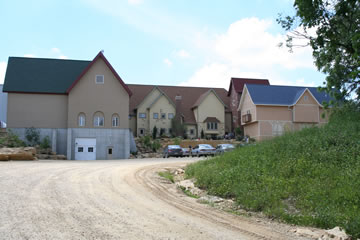 New Glarus brewery as you come up from the drive.

The brewery has definite German influence and is built approximately one mile south on 69 of the old brewery, on top of a hill. Construction started on the brewery in 2006 and New Glarus has been brewing at this location for almost 18 months.

We also drove past the old brewery and this one looks to be twice the size of the original. Maybe production will increase and they will start to distribute to Illinois again as they did around 2000. While in town you can see that New Glarus has a Swiss past as some of the motels still are reminiscent of Swiss ski lodges. 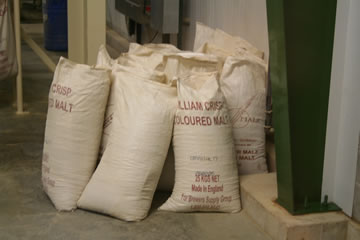 Some of the bags of malt that sat behind a locked door just waiting for their chance to enhance another beer. Imported from jolly ole England.

As you meander up the dirt, rock, and curvy entrance road to the brewery you begin to get a feeling that you are about to be greeted by something special. Once the wooded drive opened up to the brewery, we were not disappointed. My wife, who has been to Germany, said the facade of the brewery looks exactly like buildings in Heidelberg. The parking was close to full with some 30 vehicles parked in it.

Once you walk up the 20 or so huge lime stone steps you have your choice of going left, to the souvenir shop, or right, to the beer tasting. After the aforementioned tour we went for a beer tasting. The tasting, for $3.50, includes a small glass (that you can keep), and three 3oz. beers to taste. You get the beers one at a time and they give you an orange bracelet to keep track of how many you have had. 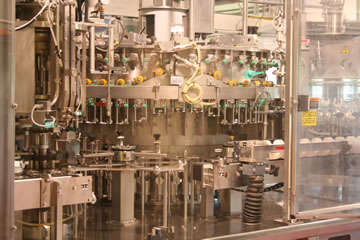 A Krone's machine that is used to cap the bottles.

The hot, sunny, humid day had those three tastings down in a matter of minutes. I had the Spotted Cow, Fat Squirrel, and Stone Soup. I enjoyed each of them but would have to say that Spotted Cow was my favorite (and is possibly their most famous beer). My wife had the Spotted Cow, Dancing Man Wheat (seasonal), and Wisconsin Belgian Red. She really enjoyed the Belgian Red but it was way too sweet for me (think Berry Weiss).

Of course you can purchase the beers at the brewery. At the base of the limestone steps and off to the right is an area stocked with pallets of beer. They charge $8 per six pack and they allow you to mix and match with any other beer that is $8 per six pack. I enjoy that philosophy as I purchased every bottled beer they had and a sixer of Spotted Cow. 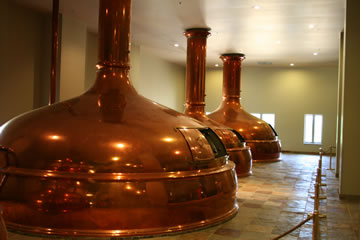 Large brass brew kettles that were imported from Germany.

The brewmaster is also set loose a couple of times a year to brew a beer of his choice. This beer is a little pricer ($9.50 per six pack) but I couldn't pass up the chance to try something unique. I purchased one for $2.38. I can't wait to start tasting!

My family and I (yes I had the wife and kids with me) enjoyed the trip and my oldest asked when we could visit another brewery because it was fun. If you are in the south-central part of Wisconsin, I would definitely stop on in, tour the brewery, do a taste test, and, of course, pick up some beer to enjoy at home on another day!