A nice neighborhood on the north side of Chicago surrounds Half Acre helping step up the walk-ins.

It is nice to see that Chicago is finally starting to become a blip on the radio in the American craft brewing scene. Half Acre Beer Company is currently one of three (Revolution Brewing isn't set to open for another few weeks) craft breweries in Chicago.

I was a few minutes late to the tour, luckily it hadn't started. After getting carded at 40 years old, I had an extra spring in my step as I walked through the door into the brewery. Some fifty people had already amassed and were holding cups, sipping on beer. What did I miss? A little, as most of them already had a few down but free beer, as I was to find out, was part of the tour and the entire tour that cost absolutely zero. That huge bonus points with me. I ended up having a chance to try all their four beers on tap and the tour capped out at about 75 people. I believe they like to keep around 25. Oh well, there are a ton of people in the are, why not spread the good will. 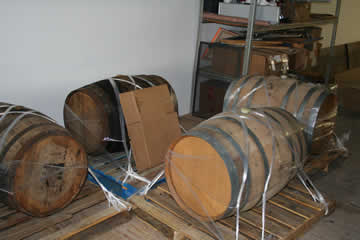 Only four in number at this time, the bourbon oak and oak barrels are sure to grow in population.

Gabriel Magliaro, who is the owner, gave the tour. After a brief introduction and the an inquiry of the crown who was a home brewer (of course I raised my hand) we were off, like a herd of buffalo, up the stairs to their oak barrel area. Hard for me to believe but only one other person outside myself raised their hand when askead if they had ever tried bourbon oak aged beer. Out of 70 people? Stop drinking the macro swill! :) There are only four barrels at this point, some are French, some are American, some have bourbon, some have wine. A nice collection for such a small group. 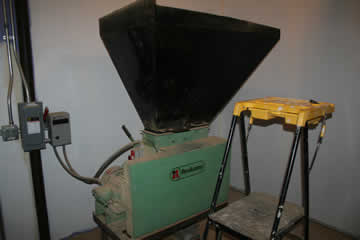 The large automated grain grinder used for opening up the husk of the grain to get at the "meat" that will be turned into sugars for the beer.

We continued to the other side of the upstairs area where the grain is stored, prepared, and dropped into the boil kettle. Gabriel talked about the different malts and how they lend their characteristics while passing around malt to be tasted. Back in a small corner closet room was the grinder for the grain, creating a much larger footprint than any home brewer could wish for.

The tour continued downstairs where the process of making and cooling the wort was discussed along with the fermentation process. A short but quick mention was made of the antiquated four bottle, bottling line was made. It seems like most small breweries have their pains locked up in a poor bottling system. I guess that makes it part of the fun. 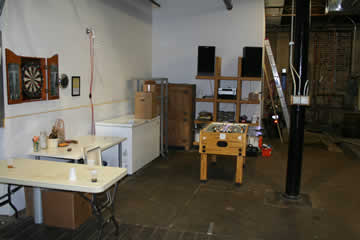 What to do on during the long day of brewing? Darts, music, and foosball anyone?

Probably the best question asked by the group was how the name, Half Acre, came about. Don't quote me on this, as I might have forgotten just a bit of the full details, but Gabriel grew up on the Delaware river, near the are where George Washington crossed. There was an area named Devil&s Half Acre. The story continued that there were barges that would go up and down the rivers and would stop nearby for drinks, have too many, and get in fights with the other river workers. Some would get killed. The dead from these brawls would be burred in the Devil's half acre. Gabriel said he left the Devil out east and only brought the Half Acre with him.

A couple of statistical tidbits for those who like them: Half Acre can currently produce about 4,000 barrels of beer with their current equipment. With additional fermentation equipment they could bump that up to about 10,000 barrels. Quit a jump.

After a great tour, some good beers, and getting a chance to hear the thoughts and ideas that are headed for Half Acre, I have a strong belief they will be around for a while and continue to grow their footprint in the Chicago craft beer market. Enjoy!