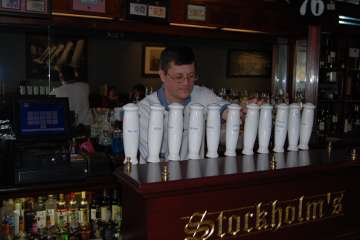 The Two Beer Dudes live in an area on the western edge of the Chicago known as the Fox River Valley. Our latest in-depth visit with a brewer was at his brewpub in the middle of the Fox valley. And for some reason the establishment hadn't been on our radar. Come to think of it, we knew about the place but without any bottling op's it required an on-site visit to sample the brews, which is exactly what we did on a recent Sunday afternoon. 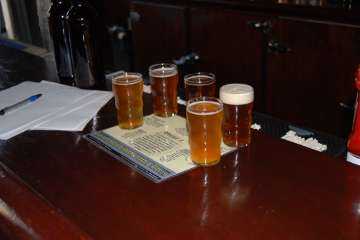 Stockholm's is a brewpub and full service restaurant located in the historic area of downtown Geneva. The name of the place is a nod to the Scandinavian roots of the area, not to any little known brew styles. As soon as we entered the pub we received a hearty greeting from the owner Mike Olesen. It became apparent after a time; Mike had a hearty greeting for all of his customers. For the next two hours we had the best time sampling his wide in-house offerings, while talking about brewing and craft brew business.

When I say a wide line-up of offerings, the day we visited there were 12 brew choices. Like with many brewpubs there are sampler groupings, here it's divided into two…Voyage I and II. And, there were two other batches that were on tap but not on the Voyages: Viking Red Ale and Winter Bock. Currently they are working on adding these offerings to their Voyages. 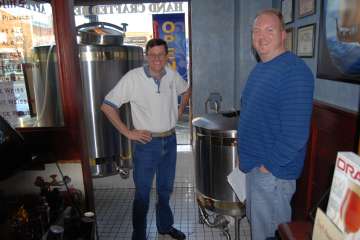 Behind Michael and me (hard to believe I am the fat guy, I usually look so skinny) is the brewing equipment used to make the fine brews at Stockholm's

It probably makes sense to first talk about the brewing process at Stockholms. The vats and fermenter are right in the front window of the pub. If my notes are correct, the batches are 75 gallons minimum and maximum is 310 gallons, or 20 kegs max. Mike normally brews one day a week, and the initial fermentation is only about four days. What's unique here is that after four days in the fermenter, all of his beers go into kegs for “cask conditioning”. A special hybrid (between lager and ale) yeast from Australia makes this process possible. The other twist in his process is using part grain and part malt, from a high-end specialty malter down south. A task few brewers have to deal with, Mike must release pressure daily from his fermenting kegs, but the result is fully and naturally carbonated beer. It's a compact process and it appears Mike does 99% (if not more) of the brewing himself.

Ok, let's get down to real business…the beers.

In Voyage II the beers were:

In Voyage I (Yes, we did them backwards) were:

My take away from Stockholms is that it confirmed the individualistic nature of the craft brewing movement. And I mean that totally as a compliment, in the great American tradition that values the creation of new ideas and the freedom to innovate. I doubt there are many other brew setups like Mike's, but that's the cool thing about the place. 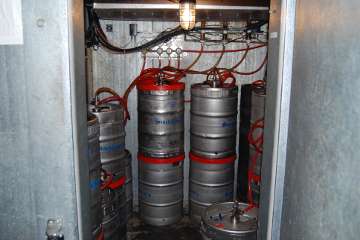 Stockholm's keg frig of all the liquid goodness that is on tap.

While I was surprised at the many versions of Stockholm brews, this isn't a place you're going to find cutting edge brews with mega IBU's. But, that's not the target demographic of Stockholms. In fact Mike had a great quote related to the topic of extreme styles. He acknowledges that he brews for the folks he sees walking into his brewpub. But he went on to say that, "some brewers who work for someone else, are brewing their resume."

Overall, Stockholms is a warm and friendly atmosphere, and we really enjoyed sampling the wide array of good beers. Take a drive along the Fox River, stop in, and tip a few with Mike