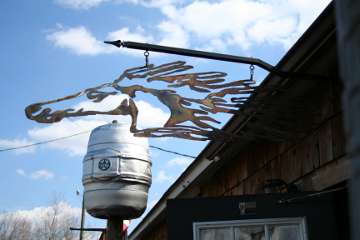 One of at least a couple metal Dark Horse logos that hang off of the various buildings.

Any time I can get a brewery hop in to a place that is on the way to or from our main destination, it is an easy coaxing; my wife really likes to explore and try new places.

Dark Horse Brewing Co. is located in Marshall, MI, a few minutes off the expressway. A very easy place to get to on a jaunt across the southern portion of Michigan, especially since they make some mighty fine beers.

I had called earlier in the week to see if I could get a tour, as I don't believe they usually get them. I was told to ask for Travis, whom I was speaking with on the phone and he would take care of me. 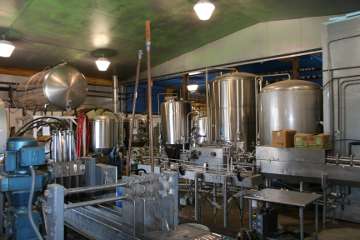 The fermentation tanks that the beer sits in for a mere three to four days.

We arrived in time for lunch. The parking lot is fairly big, seems to cater towards bikers, has a general store across the parking lot from brew pub, as well as a walk in refrigerator. Based on the size on the compact area of everything in the actual brewery, it is easy to understand why this cooler is out in the parking lot.

On first look, the brewery/brew pub looks awfully small. The first thought through my head was how do they distribute, what seems like, so much beer? Little did I realize that the brewing portion of the establishment was attached and behind the brew pub. The brew pub is adorned, walls and ceiling, with well over 2,000 mug club mugs. Being tall in there cuts down a little on the head room. 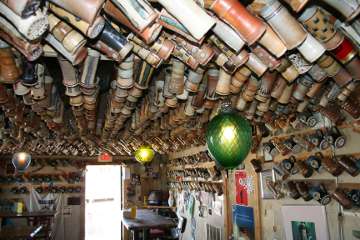 Mugs, mugs, and more mugs. There isn't much more room for expansion of the mug club: no wall or ceiling space is left.

At the far end of the brew pub is a door that leads out to the beer garden that is rather large, it includes some hop plants, stage, sand box for kids, bar, and more. Also, this door is the portal to the actual brewery, as the main entrance is situated in this area.

The brewery is tight, not small, just tight. Equipment: fermenters, brite tanks, mash tun, whirlpool, etc, ample bottling line are all cramped into a space that makes moving around a little tight. No, it isn't over whelming but I would imagine this is the reason they don't give tours. Once inside, I was talking to one of the brewers (didn't ask his name). He was working on a temperature probe and after about five minutes of me taking pictures and firing questions at him, he gave me a quick fifty cent tour. 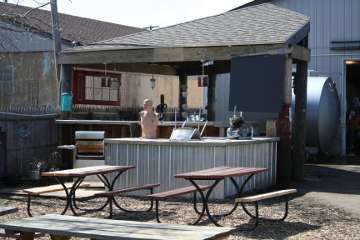 Outdoor bar area that will quickly be coming into use with the warm season.

Dark Horse brews every day. They can brew up to a 7 barrel batch (227 gallons). Most of their beer ferments in three to four days, then spends a similar amount in brite tanks before bottling. Yeah, that is right, about a week and the beer is bottled. That is quick turn around and help to solve my earlier question on how they can distribute so much beer. There grain area can hold about 25,000 pounds of grain and is on the side of the building.

Now back to the food. I did tour while drinking my double crooked tree and waiting for a buffalo chicken sandwich. The sandwich was worth the wait and darn tasty.

This a fun hop as it wasn't the normal formal brewery tour: no rushing, no crowds, no expectations, just right. If you are travelling through southern Michigan, find time to stop at Dark Horse, have a beer or three, and grab some of their good food. Enjoy!