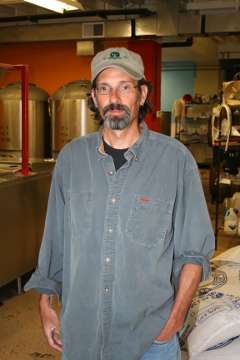 A Jolly Pumpking Artisan Ales brewery hop was something I had wanted to do for a while. We visit family in Detroit, MI, so I thought stopping off in Dexter wouldn't be that far fetched. As usual, the stop was okayed by the wife.

I made a couple of phone calls up there to see if a tour could be arranged. I was awarded a few quick shots of the brewery via the phone call and was more than happy with that reply knowing they don't do tours: something is better than nothing.

Jolly Pumpking is the majority part of a business building that is a single story with red brick. I found the only open door, which seemed to be a delivery door, and stuck my head in. As I did, I quickly noticed that the person standing there was Ron Jefferies, the owner. I said hello and we talked for a few minutes. 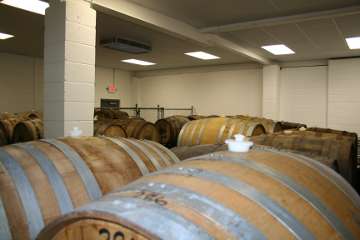 Yep, that's about 80 barrels worth of liquid goodness.

He offered to give show me around the brewery as long as I made sure that the kids and I didn't trip on any of the protruding objects in the tight walk way through the equipment and packaged beer. The tour lasted a good 15 minutes and I have to say thank you to Ron for his time and for trusting that my kids wouldn't cause trouble.

There is a wall that had recently been blown out to make room in the tight quarters. The rest of the brewery has 120 or so barrels filled with aging beer. There are a couple of large barrels (500+ gallons, I believe) that are being squeezed into an area that is being cleared out by moving the contents to the new area created by the blown out wall. The fermenters are more fat an sqatty than tall and thin. At least one was cooking away via open fermentation. The furthest back portion of the brewery is the aging area for at least 80 of the oak barrels.

Fermentation tanks. Notice the one in the back left is open. What wild stuff is growing in there?

I had to resist the urge to dig into one of those barrels for a taste. So much liquid goodness in one place. I continued to ask Ron about the brewery and his start in the brewing businees as he was never a home brewer. Straight off the streets into brewing. Why sours? He thought, correctly, that there was no one in the industry doing it, so he pushed forward with a growing business: a place in Ann Arbor and another Traverse City. He did mention that he was a little surprised by demand from the new places and beer like La Roja might actually have to be on a limited distribution this year. No stores won't be denied the beer, just maybe not as many cases in the past.

The next destination was the brewpub of Jolly Pumpkin in Ann Arbor. After looking at all the beer in oak and the packaged beer, it was time for some tart. Enjoy!