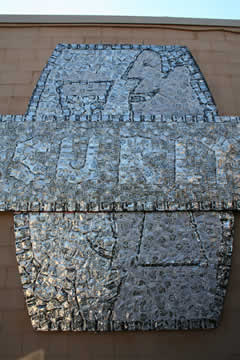 A scheduled tour for Surly Brewing Company was easily my most anticipated brewery hop in recent memory.

Now why would I make such a bold statement? I quickly heard that tours of Surly are filled up quickly and once they are filled, tough luck. Not the kind news I was looking for. Since the family jaunt to Minneapolis, MN was put together on short notice, the tour was already closed. Their sites says to not call if a tour is closed. Of course I called, letting them know I was coming from Illinois and we were placed on the list. Yes, the tour if free.

Since the tour was free, I didn't know what to expect nor did I think there would be more than 20 or so people on the tour. How wrong can one person be? The tour easily had 100 people with a pass list that they marked you off of via your id. Since the line was so long, we waited, because of the kids, to just about everyone was in.

Upon signing in, my wife and I, were greeted with five free drink tokens (six ounces each) and a room full of people that were already on their second or third beer. Pretty impressive in my mind to give out free beers to everyone that attends. 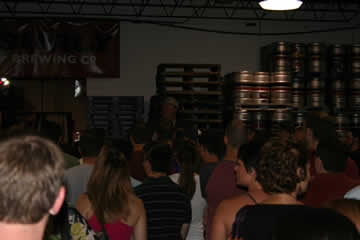 Hard to see, but that was the tour guide in the brewery, which isn't air conditioned. Did I mention that they encourage frequent visits to the bar during the tour?

Oh, I forgot to mention, when signing in they give you a piece of paper that lists the beers on tap, there were six: Mild, Cynic Ale, Bender Ale, Coffee Bender, Furious, and Bitter Brewer, a quick itinerary for the tour, and a brief history of the brewery. I will go over the history shortly but the itinerary included a good 15 minute break in the middle of the tour for drink refills (this is where I had to leave), while it came clear to me that the five drink limit wasn't strickly enforced. Yes, it was the first tour I have been to that I caught a really nice buzz and it was all on Furious

Surly is constantly working to increase production as they haven't really been able to keep up with demand since the Fall of 2006; they delivered their first beer on February 02, 2006, in spite of increasing capacity 10 fold since then through today. This year they are going to sell around 13,000 barrels (31 gallons of beer), up 4,000 barrels from last year and up almost 12,000 barrels in the breweries fifth year of existance. Quite an accomplishment and tell of how much their beer is enjoyed by American craft beer lovers. 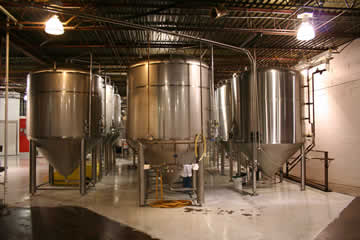 Why Surly seems to be a common question. Actually it is very simple, Surly is the way you feel when you cant't find a good beer. It is the idea of owner Becca and Omar Ansari while discussing how you feel when all you can find is Lite. Surly has canned since the breweries inception as head brewer Todd Haug talked Omar into the benefits of cans.

Because of the kids lack of patience, which was expected, I never got a chance to finish the tout. Next time. Enjoy!