One of the cool aspects of being a craft brew fan, besides the obvious enjoyment of beer, are the special events. There's a variety of these things from the normal calendar holidays, to multiple brewery tasting festivals, to special brew release parties. And on the rare occasions one gets to celebrate the growth and maturing of the young America Craft Brewery movement. Two Beer Dudes were fortunate to put a monumental anniversary on their must do list for 2010, and then attend it over this past weekend. 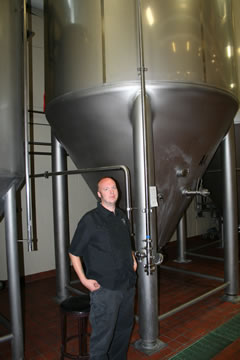 One of the Bell's brew house employees stationed around the brewery during the 25th celebration.

Bell's Brewery of Kalamazoo, MI celebrated the 25th Anniversary over September 10, 11, & 12, 2010. This high quality and brewer of most flavorful beers was started by Larry Bell, who sold first beer way back in 1985. The brewery is reputed to be the oldest operating craft brewery east of the rocky mountain range. Just as he runs his brewery, this festival was focused on and aimed to his enthusiastic customers. There was plenty of great and seldom seen one-off brews at the Eccentric Café, along with great bands, and the ability to check out the progress thus far on the huge additions and renovations of this centerpiece of the Bells operation (the Eccentric Café). But, the biggest thrill was the ability to tour the entire Comstock production facility, which is very rare for the general public…we think mostly due to virtual around the clocks operations.

So in this blog we'll try to re-create a "nickel tour" of Comstock, give a brief overview of some historical facts of Bell's we discovered over the weekend, and provide a brief overview of the festivities…though admittedly since Chicago is 150 miles away, we only stayed at the café for a few hours on Saturday afternoon. 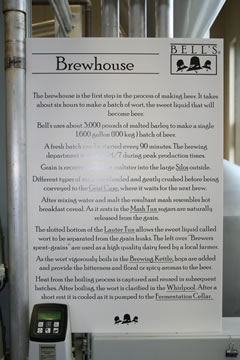 Each section of the brewery had a page of text explaining the operation in that area. View all Bell's facts.

The brewery event was the best we've ever done. We say that for a couple of reasons. First, while guests were on self guided discovery of the facility, there were lot's of display boards describing highlights of that specific section of the brewery process (brew house, yeast production, fermentation, labs, bottling/kegging, packaging, warehouse), plus other smaller signs identifying equipment, and all through the place were regular employees that actually worked in the various sections who were answering questions and providing insights into Bells. And me not being a fan of the man, these folks were NOT company stooges, but real men and women who were obviously proud to be part of the Bells team. The whole brewery was spotless, well laid out (like we now how to lay out a brewery, but it looked very logical and high tech), and it just felt like it was all dialed in. Guests had very open access to all parts of the facility and we couldn't have felt more like a welcomed guest. Ok, now I'm going to get a little lazy, but I'm going to bullet point some of the more interesting stuff that Scot and I found out on the tour: 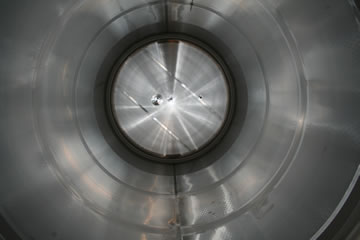 The inside of one of the 30 512 barrell fermenters at Bell's. Somewhere close to 30' tall and 8' in diameter

So, the Two Beer Dudes spent almost two hours at the Comstock location and no beer was being served, that by definition makes us beer geeks. But it was the way I’d like all my future brewery tours to be. It felt like we got some inside info and the self-guided portion felt like someone handed us the keys to the joint and said "just go ahead and look around". An outstanding time, and totally unexpected.

Then we headed to Bell's Kalamazoo complex for the real festivities. It was much closer then we had expected, about 5-6 miles from the Comstock production facility to downtown Kalamazoo. So, Bell's complex downtown consists of the Eccentric Café, the General Store, an outdoor beer garden, a small batch brew house, and under construction in-door music venue. The brew pub's been there awhile, all exposed brick and wood beams. It's definitely got a college townish, laid back vibe, but a very comfortable place to throw back some brews. The on-tap menu is a large chalk blackboard and it can now be viewed on Bell's website via live webcam, so you always know what’s on tap. We hit the General store to purchase some Oracle and 25th Anniversary Ale, it's one place that you can almost be guaranteed to score whatever Bell's been brewing. And, they got the obligatory wearables, but also it's a home brew store with decent assortment of tools and ingredients. 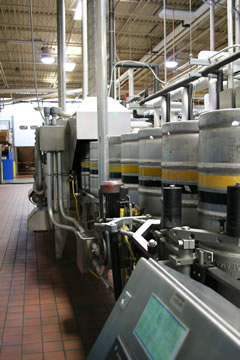 As far as giving you any detailed recap of the party events, we'll disappoint in that regard. It was a blast in and out from Chicago kind of road trip for the Two Beer Dudes, I think we only spent about an hour or so, just hanging out. What we did see looked like fun. I ran into Annette May, the first woman beer cicerone, of Merchant's Fine Wine in Dearborn. Annette is so damn well versed about brews, it was very cool chatting up the latest brew smack, and then Larry Bell himself came over to say hello to Annette.

There was a nice set-up outside in the beer garden, large tent with chairs and tables in front of the band stage. There were 4 or 5 bands scheduled throughout the day, though we only got to see a 40-person traditional German beer drinking orchestra, but they were great and most songs we heard involved toasting, chugging beers, or celebrated the good times of beer drinking with friends. Best thing was the fact that Larry Bell apparently was dragging out barrels of stashed brews from over a wide range of time. Specials on tap included: 2004 vintage Cherry Stout, 2003 vintage Expedition Stout, Wild One-an unreleased Sour Brown Ale (that was excellent by the way, let's hope this brew is part of a new groups of brews from Bell's), K2000 Stout, some French named unreleased ales, a few I missed. Hopslam seemed to be on tap all three days, and I'm sure there was some other stuff we missed.

In the under construction music venue, which is part of the old red brick complex, there were a series of display boards with lot’s of standout moments in the history of Bell's brewery. Here’s a quick recap of those I found to build a general sense of the evolution of Bell's:

What's the future hold, Bell's used the PR opportunity of their 25th anniversary to hold a press conference to make announcements on continued expansion plans. A $17M project is to be completed in early 2012 that will increase capacity by 50% and includes; a 200bb capacity brew house, 24-400 bb fermenters, and a speciality fermentation area (details to be released in the future). Then another $35M will be spent through 2016 for improvements that will increase the size of the Comstock facility by about 200% and eventually give Bell's the capacity which will be five times of what it is today. 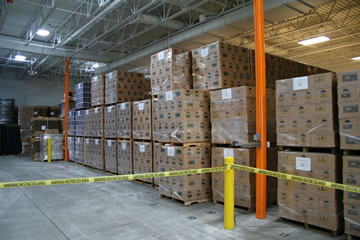 Rich and I couldn''t understand why we were shaking uncontrollably while in the wharehouse!?!?

In craft beer on-line enthusiast community there's some level of polarity in the dialogue where the larger brewers are kind of characterized as either being part of the force or on the dark side (did you really think a beer geeks could do 5-pages without a S-Wars reference). Like much in life, things are rarely black and white, so we don't want to sound like the Two Beer Dudes are canonizing Larry Bell. However, there is no doubt that Larry is a founding father of the craft beer movement. And, looking the photo collections at the anniversary event, which documented that journey, it struck me how single minded Larry had to be in his pursuit of brewing great beer. And in those first 5 to 8 years he did this without any real path to follow or any guarantee of what the work and sacrifice would result in. A visionary, no doubt. More than a little luck, yes. But in the opinion of the Two Beer Dudes, what made Larry Bell succeed was a focus on quality, originality, and a passion for brewing really good beer. Yeah, he's a really smart guy who carved out a well organized business enterprise (while still enjoying life). Though it seems like there's more to it. In looking at the upper Midwest, our little corner of the world, the brewers at the top of their game (Bell's, New Glarus, Founders, Three Floyds, and Surley) all have a similar trait. That beyond great brewing production skills, lies the hearts of artists. We enjoyed Bell's for most of their first 25 years, and wait with anxious anticipation on what they will do in the next 25. Best wishes and continued success Bell's!

Written by Rich, posted and edited by Scot.