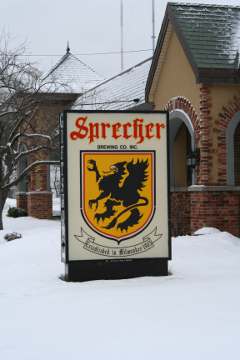 The crest outside of Sprecher Brewery.

Wisconsin continues to be the American craft beer playground to the north for me. The ridiculous amount of breweries, and good breweries at that, amazes me, while giving me plenty of places to go on for brewery hops.

Sprecher Brewing Company in Glendale, Wisconsin, is a mere two hour jaunt north. The entire family went, so the tour reservation was for five. The cost for an adult was $5.00, which included four, eight ounce samples of beer and the glass that the beer was served. There was somewhere around 12 beers on tap. The $2.00 entry fee for the kids, yielded them endless refills of pop at the end of the tour.

The tour began slightly late, which isn't a matter to me. We had plenty to look through in their large gift shop. Our guide was David, who had done less than a hand full of tours. Unfortunately, it showed. Not trying to be cynical, but on enough tours to know, everythign seemed rushed, short, and not thorough. For $5.00, I guess I wanted more. I would trade the beer for the knowledge any day. 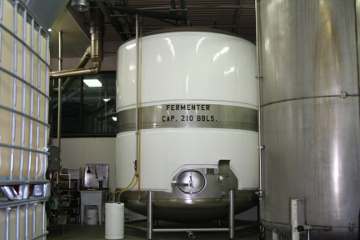 Sprecher was opened in 1985 by Randy Sprecher with two beers: Black Bavarian and Special Amber. In 1988, in order to have something to drink for kids on tours, Sprecher launched its soda line. In 1995, the brewery was moved to its current location which is an old elevator factory. Strangely enough it is a single story building but it does show some age. Currently they are producing 15,000 barrels of beer and 50,000 barrels of pop each year. The brewery is going to be expanded so that they can brew beer and pop at the same time.

The current setup uses a gas fired brew kettle as Randy believes that beer tastes better brewed by a flame. The bottling line can finish off 120 beers per minute as they flash pasteurize their beers. There is also a cool looking mural by the bottling line that is how the owner believes Germany looks. Sprecher uses all Wisconsin malt (Briess), the water they use is filtered from the Milwaukee River, and the hops they use currently come from the Pacific northwest, but they plan on tapping into the growing Wisconsin hop market in the coming couple of years. 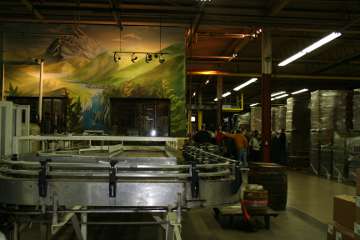 Notice the German country side mural in the background.

Menards is one of their biggest distributors, especially for pop, and they just started making seasonal pops in response to a request from Menards. Therefore a lot of what they do in the brewery is dictated by the large chain.

The end of the tour signified time to get our beers and pop. To start, each person had to choose between three already poured beers: Hefe, Oktoberfest, and Winter. Not to be a jerk, but that made me a bit angry: why do I have to choose a beer to help you rid yourselves of left over seasonals? After I choose the Oktoberfest, which must have been out too long as it was almost room temperature, I went with the Russian Imperial Stout. I had this as I wanted to purchase a bottle to take home, alas, I did not leave with a bottle of their RIS. I had one last beer, that I didn't even bother to write down, but my wife and I only had five out of the eight beers we could have between us. We never like to waste drink tickets but we both decided we would not be happy with anything else. We had had enough. 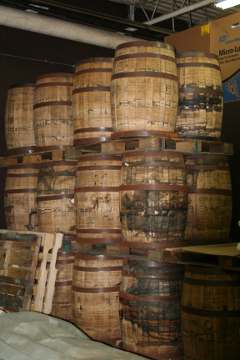 Not a huge section, yet, but they make some mighty fine bourbon aged beers.

I did try to give Sprecher a chance as I was on the fence with their beers. All of their beers do come in 16oz bottles, so that is four ounces more of liquid love. On the downside, I did purchase a bottle of their Barley Wine, then proceeded to go to a local beer store for some goodies and found said Barely Wine for $2.00 per bottle cheaper than at the brewery. Crap!

I do have to say this is the first tour that I am not 100% happy. I usually don't say anything on the negative side but I felt my due justice to be served by speaking up here. I still like Sprecher and will have an occasional bourbon aged beer (none were on tap) but I won't go out of my way for their beer, nor would I recommend their tour, there are far better in the area. I think their Root Beer is completely fantastic. Enjoy!