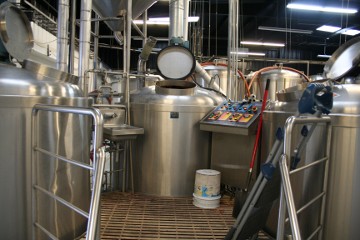 This year's family vacation brought me to Orlando, Florida. I took the opportunity to make a visit to Orlando Brewing Partners situated in a small industrial park, with the brewery storing many kegs and either old, soon to be added, or non-functioning fermentors outdoors.

Once inside there is a bar that will hold 12 - 15 patrons plus 5 - 6 tables for small groups to sit. The tasting room always has at least 12 of their own beers on tap at any given time. There are board games waiting to be played. Bellying up to the bar I ordered a pint of Fetch Cycle IPA a 6.7% ABV American IPA. Since the weather is so damn hot in Florida, I needed to order another house brew for the tour, especially since you are encouraged to brig a beer with you. I chose the Blonde Ale weighing in a 4.73%. 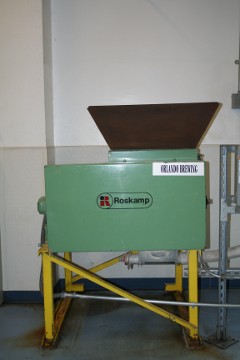 The grain mill used to crush the grain for the 15 barrel batches.

The brewery is 100% certified organic by the state of Florida. The tour guide wore this like a bagde of honor, which he should, as getting that certification isn't easy. The owners also follow the Reinheitsgebot (Rine-hites-ge-boat) the German Beer Purity Law of 1516. Orlando's brewing equipment allows them to make 15 barrel batches. The chiller they use to cool their beer in order to pitch yeast, has some 70+ feet of surface area crammed in a little box three feet tall. In the time it takes the wort to pass through the chiller it goes from near boiling to 65 degrees.

I was only one of five individuals on the tour. The brewing process was discussed with some interaction with participants with myself quickly becoming the go to person for the "tough" answers. The tour lasted some 30 minutes or so in the substantial heat of a Florida summer afternoon which was perfect. I picked up a bottle of their Anisocoria a 2008 American barleywine. If you are in the area it is worth the stop for at least a pint or two. Enjoy!