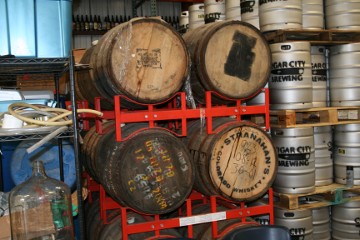 What liquid goodness lies within?

When my wife mentioned that she wanted to take the kids to Disney World this year my mind immediately started thinking of American craft breweries that I could hit while in the south east. Cigar City Brewing Company came to mind rather quickly. I know there are other breweries in that region but Cigar City seems to be the one that everyone is noticing.

The brewery lies in a rather small industrial park and is quite easy to find since it is in the first building of said complex. I eagerly opened the door to the brew pub with the anticipation of a little child. 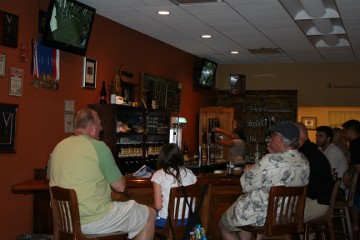 I quickly ordered a taster of four beers: Tocobaga, Puppy's Breath Porter, Maduro Oatmeal Raisin, and Jose Marti. Each was distinct but Tocobaga was by far the best of the four. I grab a pint of Jai Alai IPA - White Oak for the tour.

Cigar City was originally had two employees just several years ago. They are already up to 32 employees and brew around the clock four days a week as the brewery is only capable of 15 barrel batches. A new facility, just further down in the complex, is due to open in late September, early October. Hopefully this will give them enough capacity to distribute to Chicago. 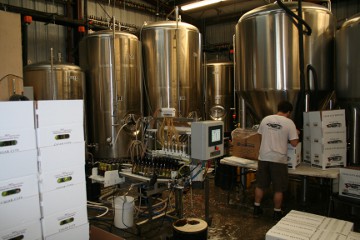 Bottling line that is rather small for what they produce.

Since they brew around the clock at Cigar City, the brewery employees were moving around quickly: stacking pallates, packing pallates, moving pallates, bottling, etc. The bottlling line is going to be greatly updated when they move to the new facility as their current one is lacking a bit.

Yeast is used for 12 generations. Jai Alai is their most popular beer with Jai Alai - White Oak (my favorite) a close second. The white oak that they age Jai Alai on is actual a spiral in shape so their is more surface area and aged for seven days. Definitely worth the stop for the beer and the tour. I can't wait to go again. Enjoy!