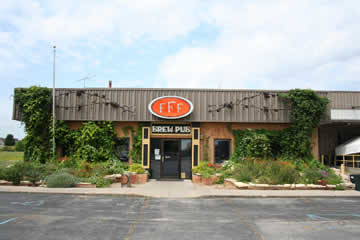 The Three Floyds Brewing Co. brew pub that is joined at the hip to the brewery in Munster, IN.

Three Floyds Brewing Company is in Munster, IN only a five minute drive south of the expressway. It is located at the back end of a business park, the Three Floyds Brewery resembles more of a sheet metal pole barn with a makeshift beer pub to draw patronage. Don't be fooled by the look, this place has some great beer (affectionate towards hops) and are serious about making good beers.

Once again the entire family was part of the trip as the brewery hop was just a bump in the road for a greater family day at the beach. The tour started at 3:00pm and cost a buck, so $4 of it was worthless as my wife and kids didn't make it through more than five minutes of the tour. Hey, they were excited about the beach! 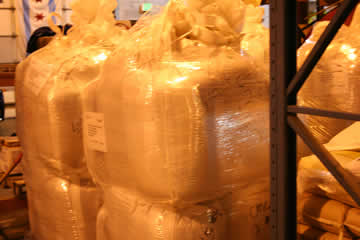 Back to the tour. Travis was our tour guide and was in charge of packaging the beer. There were some 30 - 40 people on the tour. One small group of guys celebrating a bachelor party and group of women celebrating the start of girls bachelorette party. Needless to say some of the girls didn't seem to happy to be spending time all dressed up at brewery. Obviously those girls aren't good potential dates!

Travis started the tour by talking about the grains that go into Three Floyds beers. Three Floyds uses 2-row malt in all of their beers as the base malt, other malts, spices, wheat, etc are used for color, flavor and aroma. He did a good job of talking about the brewing process and how malts play their roll in terms of heat, water, yeast, etc. to start the brewing process. 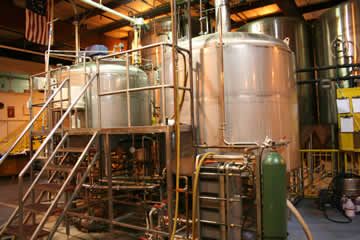 350 gallon containers that are used to bring malt and water mixture up to 150 to 160 degrees.

Currently Three Floyds can make about 350 gallons of beer at a time. That much beer uses up one full pallet of 2-row malt: 2,200 pounds worth!!! He also mentioned that some of their beers can use up to 70 pounds of hops during the dry hopping portion of the brewing process.

We continued over to the fermentation area. Some of Three Floyd's fermentation containers could hold between 350 and 900 gallons of beer. Since their boiling containers are only 350 gallons they sometimes have to make three batches of a beer to fill the 900 gallon containers. I believe they are going to be getting in another two fermentation tanks sometime this coming week to increase their brewing capacity. Three Floyds doesn't filter any of their beers so they are all held in cold storage to prevent spoilage. 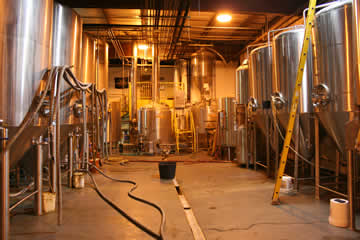 Large fermentation tanks is where the beer sits for a varying amount of time based on the type of beer.

The tour proceeded to the bottling/packaging area of the brewery. Their new bottling machine that is some 40 - 50 feet in length, can fill 30 bottles at a time. This machine has increased their production from 35 bottles per minute to 90 bottles per minute.

Three Floyds is currently in a huge expansion period of the brewery. This year they are on tract to brew 18,000 barrels (31 gallons per barrel) up from 8,000 barrels just two years ago. They currently can be purchased in northwest Indiana, Indianapolis, and Chicagoland. They just opened bomber and draft shipments to Wisconsin earlier this year and are ramping up to six packs to that area soon.

They plan on saturating these markets: keeping fans happy, before starting to distribute to other markets. Past experience has lead to this distribution plan. At their current rate of growth, I am sure if you are a fan and live in the Midwest, you will find them on a store shelf near you soon.

Earlier in the day we had stopped off at the brew pub (noon) as their phone recording says that space is limited on the tour. I wanted to buy tickets to ensure a spot. The bar keep assured us that space was unlimited and the tour was free(?). While there, at this time, I thought it would be a good time, since there was only five people there, to purchase the beer that I wanted to bring home and taste. 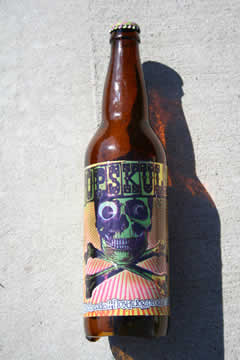 Dead soldier of Three Floyds Popskull – for some reason the bottom fell out.

I purchased a sixer of Gumball Head, and a bomber each of the following: Popskull, Gorch Fock, Blackheart, and Jinx Proof. The Jinxproof was added to the mix as I told the bartender to add one to the mix and surprise me. Sometimes those surprises turn out to the be best.

Unfortunately we had a causality on the way to the beach after the tour: Popskull. As we were driving were heard a loud sound of a beer being opened and in hindsight it had to be the bottom falling off the bottle. It was almost a complete clean cut: no shattering, no splintering, etc of the glass. I didn't even realize this happened until I was in the back of the van getting out the beach towels and smelled a delicious amount of beer aroma emanating from the back. Those towels actually came to the rescue in helping to clean up the mess.

Three Floyds Brewing Company is a neat place to stop by and have a pint and hear about the process they use in creating their beers. So if you are passing through northwest Indiana sometime, try and make time to check them out. Enjoy!