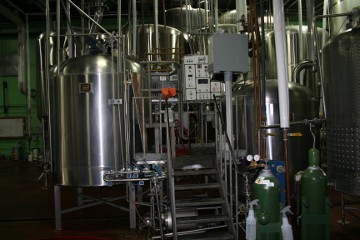 It has been a very long time since I have been physically located within the border of Georgia. It has nothing to do with not wanting to be there but since I was a youngster, I have always flown down to Florida. I am not a snob, I have only been there thrice since, but the 20 hour or more drive can be a killer. I am sure glad that we drove down so that on the way home I could meander from American craft brewery to brewery.

Terrapin Brewing Company was on the radar for a stop. The brewery is located in Athens, Georgia home to the Georgia Bulldogs. 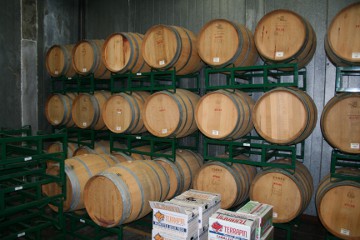 Upon arrival to the brewery, you have to go through the gift shop which allows you to purchase a glass and eight drink tickets for $10. Drink tickets are good for a four ounce pour, so four are needed for a full pint. A beer garden, which is fenced in and close to an acre, was full of college co-eds having a few beers, playing corn hole, and tossing a frisbee around. I burned through a few dirnk tickets before the tour, netting Rye pale ale, Tom Foolery, and Hopsecutioner. I ended up using the rest of my tickets on a full pint of Hpsecutioner after the tour.

The tour started and only included two other guests besides myself. The brewery was hot and I believe the guides' patience was too but he did go over the basics and some history of the brewery. Started by two friends in 1998,the brewery didn't open its door for the first time until 2002. The entire time they were working on and perfecting the recipe for their Rye ale which won gold at the 2002 GABF. Up until 2007 almost all brewing was done on a contract basis. In 2010 Terrapin brewed up 10,000 barrels and another 1,500 barrels via old contracts for contract brewing. 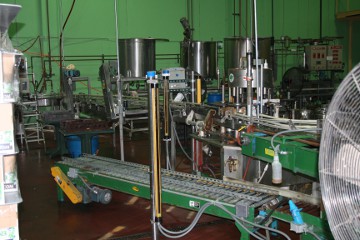 One bottle a second.

The artwork for the labels is all done by the artist that created the album cover for the Grateful Dead's Terrapin Station. The brewery had one hidden secret that the guide shared with me after the other two on the tour left: they have some wine barrels that they are aging beers in. The barrels are all different and the end beer/desire for what comes out has completely been determined. I sure it will be short released and yummy.

Georgia didn't officially repeal prohibition until 1994, making American craft beer in Georgia a youngster compared to other states. The number of breweries will grow but I am sure that Terrapin will always be a staple. Enjoy!