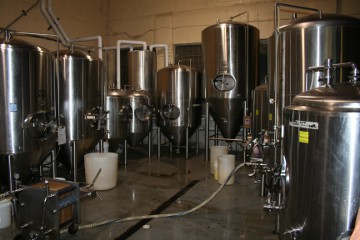 Buckeye Brewing is located in an old red brick building complex in with the bricks have been mildly worn away by the elements. Immediately my kind of place. As I rolled up the clouds unleashed thunder, lightening, and the typical bevy of rain that follows such a ruckus. The front door, if you can call it that, was locked. I was on the horn with Garin to determine the best way in: the loading dock should have been obvious.

Inside I was greeted by Garin Wright, head brewer/owner, and Ray McDonald, an assistant. The weather continued to rock the old building but the old construction was up to the task, swatting wave after wave of thunder and lightening like Patrick Ewing in his prime. Ray was moving beer from a fermentation tank (Cleveland Porter) to a bright tank. Garin was brewing up a batch of Hippie IPA. 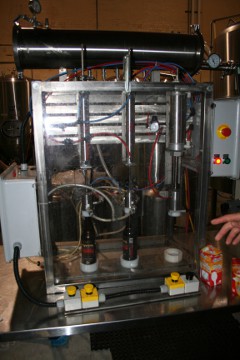 Immediately they greeted me, welcoming like family. Cleveland Porter was served up form the brite tank to break the ice. It wasn't long before we were talking about the history of Buckeye Brewing, their system, recipe formulation, brewing in general, and more. Throughout our conversation my gracious hosts continued to bring on the tastings: Redhead an Irish Red, Hippie IPA an American IPA, '76 an American Imperial IPA, and an Imperial stout aged in Petit Sura French oak wine barrels (flat out fantastic!).

Buckeye is a 15 barrel brew house with 12 to 18 brew days during a typical month. Fermentation space is the main limiting factor on brew days. They should brew 1,000+ barrel this year. Total barrels should increase as a new distributor was recently brought on to bring Buckeye to more areas in Ohio. The bulk of the beer is sold in keg, 75%, while bottling is only in 22 ounce format. No 12 ounce bottles here. Typical prices range from $5.99 to $7.99, great pricing based on prices in my local area. Hippie IPA is the big boy in the arsenal, accounting for 60% of the beer Buckeye brews. 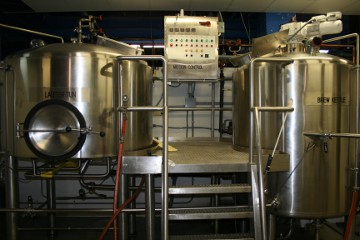 Even with the great lineup of beers that Garin is formulating and brewing, he has never had any formal training. Started the way that most of home brewers do: reading book. His collection of books reads like a whose who list of brewing books from the '90s. Hippie IPA, their best selling beer, was inspired by his readings.

Garin started messing around in middle school with fermentation along with a friend Dale. They tinkered around with any fermentables they could find in the kitchen cupboards, such as molasses, honey, and corn syrup. In 1992 he was home brewing. After his Dad fell in love with some craft beer while on a trip from Maine, his Dad decided that he wanted to open a brewery. After a stalled start (partner backed out), Garin's Father came to him and asked if he wanted to open a brewery together. In 1996, Buckeye Brewing was the culmination of the father-son partnership.

Garin was nice enough to treat us to lunch at Buckeye Beer Engine. A perfect ending to an outstanding brewery hop. Enjoy!

"Beer has to be clean and good", Garin Wright.