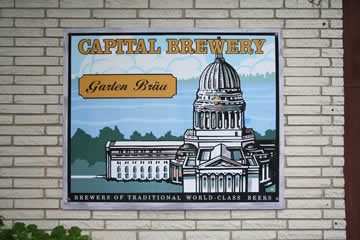 Capital Brewery sign on the side of the building pointing out the fact they have a beer garden.

Capital Brewery is located in Middleton, WI, a suburb of the capital city of Wisconsin, Madison. Our brewery hop was scheduled for 3:30pm local time.

Capital Brewery started in March, 1984 and produced it's first beer in the spring of 1986. The brewery is located in a former egg processing plant. They produce 22,000 barrels (31 gallons per barrel) each year. Their current brewery is at capacity and the only way to up is to actually brew beer at a brewery in Stevens Point, WI.

The tour costs a mere $3.00. The price of admission also gets you 20% off non-beer items in their store, and, as we found out as the tour goes, a three ounce glass that was filled up four different times throughout the tour. 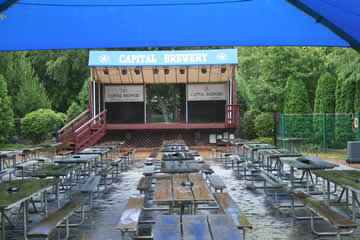 The beer garden from the outdoor bar. There would soon be a band setting up for the evenings festivities.

After we paid for the tour, we arrived at 2:45pm on a raining afternoon, we went out to their beer garden for a pre-tour beer. I had the Wild Rice beer since it has been four or five years since they last made the beer and the wife had the Rustic Ale. From talking to the bartender I learned that the reason they quit making Wild Rice was that the price of the rice they used jumped to $10 per pound and the new version is using a &cheaper& brand. Capital Breweries beer garden has a band each Friday night during the summer and can hold some 2,500 band groupies.

The brewery hop started with a brief introduction about brewing and our first taste test, Island Wheat. We proceeded to the area in which they create the mash and wort. Next we went to the fermentation area which also contained the equipment to fill kegs. The current machine can be operated by one person and does the job that 10 people used to do prior. Beer number three was in our glass before we continued on. The last stop on the tour was where they store their packaged beer, we also received our fourth and final tasting. I did notice that they already had their Oktoberfest beer packaged. Oh, Oktoberfest, what a wonderful time of year. 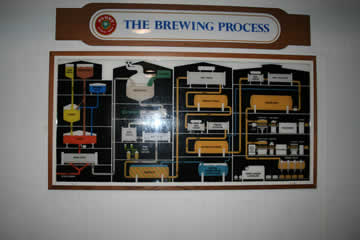 A sign from hanging in Capital Brewery from Pabst that explains the brewing process.

A lot of the equipment that is in use at Capital Brewery is from Pabst. Some shows it age but it obviously and definitely gets the job done.

I noticed that there wasn't any bottling line shared on the tour. I ended up asking the tour guide after the tour if I had missed something (I had the three kids and wife with me), he said that all their bottling is done in Steven Point, WI. They ship everything up there in the kegs, thus the kegging machine, and then are at the will of that brewery in terms of getting their product back. 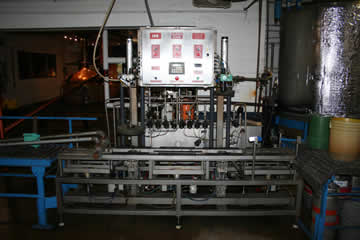 The keg loader that allows one person to do the job of 10.

Everyone we met at Capital Brewery was extremely friendly and nice. The bartender gave us two cans of pop and a bottled water for the kids for $1.50. Can't beat that deal. We also found a public water park near the brewery that we enjoyed lunch while the kids enjoyed the refreshment of the water. The Madison area is beautiful and Capital Brewery is a comfortable place to enjoy a cold brew and a hop. Enjoy!