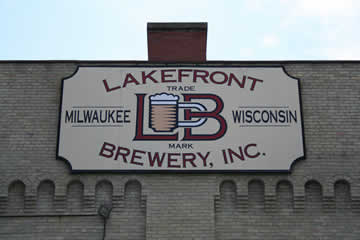 Lakefront Brewery sign on the front of the brewery welcoming all.

Lakefront Brewery is located near downtown Milwaukee in an old coal electric plant from the nineteenth century. The brewery was purchased from the city at a time in which the area wasn't hip. They spent almost a year removing old coal from one area of the &new& brewery. The building shows its' age in a good way: I enjoy the old, worn look of the bricks.

We took the noon tour by dumb luck and it turned out to be the best move the of day. At the end of the tour we went back around to use the washrooms and the rest of the tours for the day were sold out. It was a hopp'n place by 1:00pm. 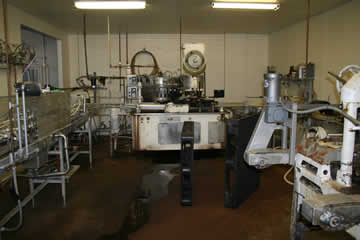 Old bottling line that is used at Lakefront Brewery.

The tour cost $6. The most expensive tour I have been on, but well worth it. The tour lasts about 45 minutes, you get four 8 ounce beers, a coupon for a free pint at any local establishment that carries Lakefront on that day, and you can turn in your biodegradable cup for a pint glass at the end of the tour. That is a lot of bling for $6!

The tour starts out in the warehouse where the beginning of the brewery process begins: mash tons. The tour guide is a school teacher in her real life and is a spark plug of energy. The tour is interactive between the guide and tour group. They use a bit of comedy to make the tour fun for even people that are dragged on the tour. 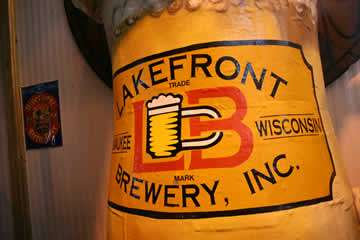 Mug that was purchased at auction from old County Stadium.

The tour meanders through the rest of the facility going past the fermenting tanks, a beer filling station (more coming), into their keg and bottling line, where the tour ends. On the wall there is a framed picture of Laverne and Shirley with the words to the song from the opening of the show. In order to leave the tour, one has to sing the song. Good fun.

There is a beer filling station half way through the tour in which you can get a refill as they really believe in the patrons enjoying the fruits of their labors. Right next to this area is the mug from County Stadium in which Barney the Brewer would slide into. The owners had also purchased the slide and had it installed in the brewery. Unfortunately it was taken down after one inebriated person got hurt on the slide. That would be fun after a few beers, too bad. The Brewers tried to buy the slide back at one point but were refused by the owner since he enjoyed watching drunk people slide down it. Of course this was before the legal action. 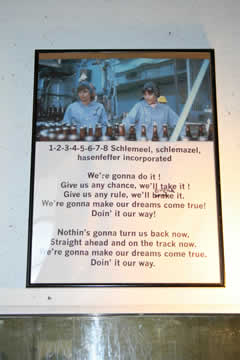 The end of the tour. Sing your damndest or sing on your own in front of the group if you are a showman!

My wife really enjoyed the beer that she had on the tour and said that this was her favorite brewery in terms of beer as their wasn't much she didn't like. She did add that Oberon was still her favorite beer.

Lakefront Brewery is in a great location and the area has a lot to offer. One could easily make a day out of it by doing the tour, eating some good eats, riding on the bike path, checking out the lake front, and attending a Milwaukee Brewers game. The tour was the best I have been on in terms of having something for everyone - even the kids didn't ask to leave this one. Head on up to the Milwaukee, catch a buzz, and enjoy another good Wisconsin brewery. Enjoy!