Tyranena Brewing Company welcome on the front of the brewery.

Tyranena Brewery is on the small side and located just off the expressway a mere 30 minutes east of Madison in the town of Lake Mills, WI. The brewery is in what looks to be a newer facility that is of the new medal sided rectangular types they put up these days (yeah, great description).

As I like to be, we were early for the tour so I decided to grab a pint from the bar. I went with the Chief Blackhawk Porter. The day before I had been at Star Liquor in Madison, WI and a rep from Tyrenena happened to be there having a taste test. So in the five minutes I had to test before she was ready to leave, I tried the Chief Blackhawk Porter and a couple of other flavors. My little three ounce taste test only teased me and made me want more. Much, much more. So what better way to have one than from the source. I really like this beer, a lot. 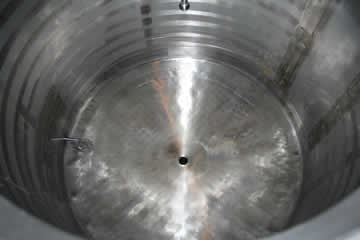 The inside of the boiling tank that holds 30 barrels.

The cozy bar is has a whole bunch of board games that anyone can play. So I lost a game of checkers to my oldest. There is also a small beer garden: 5 - 6 tables on a cement patio that is nicely landscaped and has some hops growing around it.

Tyranena is a small brewery (6,000 barrel production each year, but capacity is much larger) and only employees a few full-time employees. The assistant brewer, Nevin, gave the free tour and shared a ton of knowledge about brewing with the group. He still is a proud home brewer.

Most of the equipment in the brewery was purchased from a failed brewery in Minnesota. It all looks new and eager to brew. This is the cleanest brewery I have been in. I am impressed with how sparkling clean it looked. 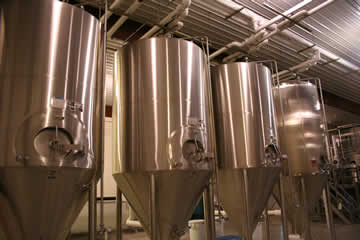 Four of the five fermenting tanks. These are 60 barrel tanks, so it takes Tyranena two brewings to fill it completely.

Nevin talked about the different ways to prepare malt and passed around containers with malt in them, encouraging you to smell and taste. I was surprised at how subtle some of the difference were but how much flavor change they add to the finished beer. We were even given a glimpse of the room in which they pull in the malt (from an outside 60,000 pound storage tank) and it gets crushed to help begin the malting process going.

Near this area is the mash tun (mixing of water with malt to start the sugar process), lauter tun (removes the wort from the mash), boiling tank (boil the wort to get out impurities), and whirlpool tank (helps to separate out any other impurities from the mash). These four tanks mark the beginning of the brewing process begins. All four tanks are tightly but nicely situated together so that one set of stairs and decking allows a brewer to service all four with only a few steps. We were all given a chance to climb up, take a look, and see the inside of these big tanks (30 barrels). 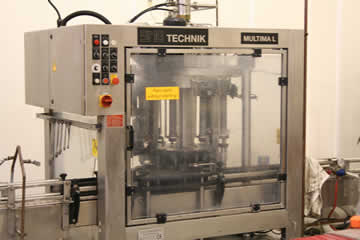 Tyranena has five 60 barrel tanks for fermenting the beer. These stainless tanks take two brewings to fill since the other tanks are only 30 barrels. Very close to this area is the one keg, kegging machine and the bottling line.

We were then taken into the large refrigeration room that they store all their finished beer and oak barrels used in making Rocky's Revenge. Nevin also showed us the hop pellets that they use in the brewing process. The noob that I am, I never realized that most places use the pellet since it isn't as messy and there is a less chance of clogging up the machinery. A little chilly in there but worth it for the knowledge. 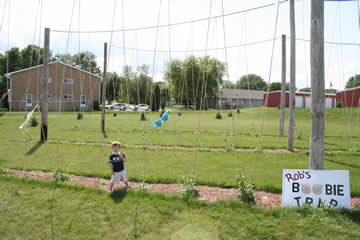 The young hop plants out behind the brewery. In a few years they will be mature and will start to be harvested.

The last stop on the tour, outside. They have three rows of 75 feet (or so) of Centennial hop plants growing. These are new plants are none were taller than me. Also learned that the female plant is the one that is used in brewing. They are planning a big party for when the plants mature and they use the hops in a special brew. I plan on making it back up there for this in a couple of years.

This was a good tour if you are interested in learning, in depth, about the brewing process and aren't afraid to ask questions to pull Nevin deeper into the brewing process. The kids weren't too fond of this one, so keep that in mind (but there is plenty of open space to run around and they are dog friendly). Tyranena is a little brewery making some really good beer and they seem to have a good following in the area. If you want to see a super clean brewery and enjoy a tour with a homier feel, check this one out because you can't go wrong. Enjoy!