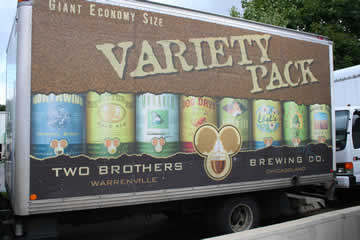 Two Brothers Brewery logo and sign on the side of a delivery truck. The closet thing I could find at the brewery to a sign since the building was baren.

Two Brothers Brewery is located in Warrenville, IL which is just a hop, skip, and a jump from home. It's been over a month since the last brewery hop and it was a lazy, unusually cool day in Chicagoland, so Rich and I thought it would be a great idea.

We arrived early for the 2:30 tour and decided that in the fifteen minutes we had before the tour a pint would help pass the time as it is almost impossible to stomach the Cubs game on the television. Strangley enough Two Brothers Brewery doesn't have any type of sign on the side of the building. Easy to miss but it is the only building in the business park that had a full parking lot on a Saturday afternoon. Rich chose the Moaten, a Flanders Red Ale, and I had the Dogs Days, Dortmunder/Export Lager. Rich enjoyed and babied his enough to have to finish while on the tour. I also enjoyed mine but manned up and finished quickly.

There had to be 50 people on the tour, while the tour guide was giving just his second tour ever: his first was at 1:00 pm, just 90 minutes before ours. 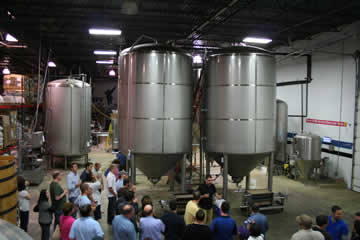 Fermentation tanks with an attempt to give an idea of th size of them. Note the gymnastics logo way in back.

Two Brothers was actually founded by two brothers: Jim and Jason Ebel, back in late 1996. They had been home brewing for a while and were prodded by friends and neighbors to brew for a living. In 1997 they produced 300 barrels of beer and were underway. In their current 40,000 square foot brewery, they produce 900 barrels of liquid joy each month. They are the second largest brewery in Illinois next two Goose Island Brewery.

The tour began with an explanation of the brewing process and a chance to look at and into their mash tun, lauter tun, and boiling vat. I estimate they had to be in the 500 - 700 gallon range. All were made from stainless steel, no copper here. 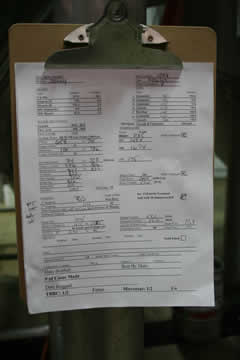 A good ole recipe sheet hanging on one of the fermentation tanks.

Next onto the fermentation tanks where each, that is in use, has a recipe on a clipboard attached to the tank. For an aspiring brewer, like myself, an interesting article to see.

The last stop on the tour was back by the bottling line. Their line uses a Krones machine to fill the beer which are the Cadillacs of the industry. It can fill some 150 bottles per minute. Their bottling line is the most labor intensive portion of the brewing process and starts off with a palette of 2,200 bottles being added to the line and ends with workers placing the bottles in boxes made by another machine.

Surprise of the tour: as you meander around through a narrow corridor on your way back from the tour, you come out by the bar and you are given three tickets. Each ticket is good for a 4 ounce taster of one of their beers. Yeah, free beer on a a free tour. That's a first for me. 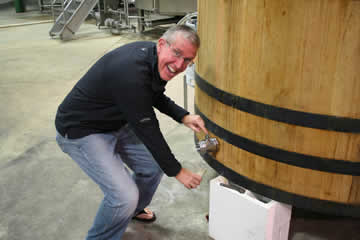 Rich trying to "steal" a free pint from a huge French virgin oak barrel. Easily ten feet tall and Rich only wanted a tiny sip, they wouldn't miss it.

Because of the wonderful liquor laws in Illinois, Two Brothers has a sister company for distributing that shares the building. In order for a keg to be tapped in the pub, it has to be sold to the distributor, who in turns sells it to the pub. How you like that crap? The pub is nice, seems to have decent food, prices, and they have eight of their own beers on tap and a load of other American craft beers in bottles.

They have a store but, refreshingly, it is geared towards home brewers. I spent a few minutes in there looking around and when I start brewing in early 2010, I now have a local place to go for goods and, I am sure, some knowledge.

If you are in the western suburbs of Chicago, head out to Two Brothers for a few pints, possibly a tour, some grub, and some home brew merchandise. Enjoy!