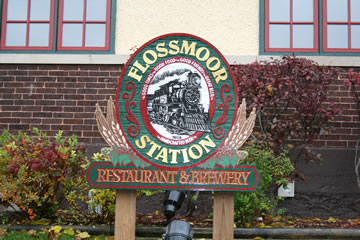 Sometimes stuff just works out better than you hope. Two Beer Dudes first official visit with brewers on site, Bryan and Richard of Flossmoor Station Restaurant & Brewing in Flossmoor, IL was definitely the experience we hoped would to be. Got to know the guys, their home court of brewing, and insight into the psyche of this brewery. Watching a batch of their Pullman Brown Ale made in the small, clubish brew room was the plus-plus experience. As much as we've enjoyed the general public brewery tours we've been on before, spending the day at Flossmoor gave us an even higher appreciation for folks involved in craft brewing. Plus, the scale and setting of Flossmoor couldn't be any better. 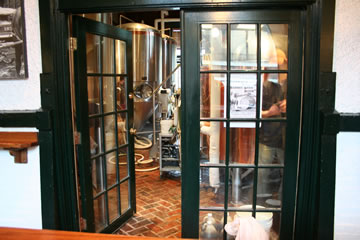 If you pick the right spot, your view is right into the brew room.

Let me set the scene first. It's a Friday in the south suburbs of Chicago, with the fall colors just a shade past their peak, leaves are everywhere. Flossmoor is a very scenic old suburb with tree lined streets and classic dark brick homes. The Flossmoor Station Restaurant & Brewing are in the center of the small business district, in historic train station building on the still busy main commuter train line (to/from downtown Chicago). They've been a brewpub since around 1996.

This old railroad station building is a perfect setting. Lots of brew rooms are oddly placed or way too prominent, but is this location it's a nice balance. So here the kettles and fermenters are slightly off center of the main entrance, but each wall of the 15 - 20 foot high brew room had a set of cool paned windows and a double French door access. For those of us that spend our days in a stall at the corporate cube farm, it's not too shabby. 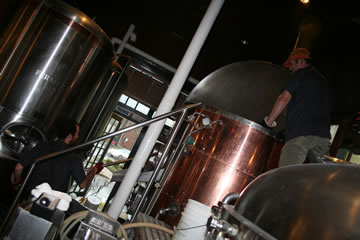 Bryan and Richard cleaning out the mash tun after moving out a batch of Pullman Brown.

Bryan Skimkos is the head brewer, and a real personable guy. He's serious as hell about his craft, but in a casual, down to earth manner. Oh, and I suppose it never hurts to have a brewer with a Masters in microbiology. Second in command is Richard Grant, a man of few words but also very knowledgeable about his craft for a young dude.

Ok it's stat's time. The guys are brewing 1 to 2 batches a week of around 15-barrels per. There are 4-fermenters, so the math is roughly 700 barrels a year. Not bad for the little space that's available for all the brewing, packaging, and storing. Their bottling operation is a 4-"at a time bottler", with approx capacity of 15-cases in a 7-hour shift. They have (8) standard or main brands. When it comes to specials or seasonals, this is where the math gets fuzzy. When I pressed Bryan he said they did 12-15 seasonals. It's impolite to disagree with your host, but I think between barrel aging and inherited special projects these guys are doing a whole lot more than they give themselves credit for. 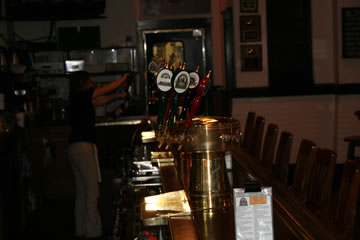 Now to the brew lineup. House Ales-Golden, Honey, Wheat, Wheat-Cherry, Red Ale, Brown Ale, Stout. Current Seasonals-Big Black Pumpkin Porter, Hop Huffer IPA, Collabrative Evil, Black Magic Blk IPA, Frankenstein Dortmunder, and frankly I lost tracked of a couple other brews on tap, about to be released (know there's a Hefenweizen coming soon), and four barrel aged brews being served at the Fest of Wood Barrel Aged Brews in Chicago on Nov 7th. We did ask about the next BIG release the guys are excited about. It's tentatively planned to be called "High Five Rye"...11% ABV, bottle only...approx release is Feb/Mar 2010.

If there's one thing I took away from my day at Flossmoor, it was the untapped potential of craft brewing at this small place. Flossmoor brews great beer, both under the tutelage of the current brewmasters and the standards set by the brewers before (most recently Mat Van Wyclk). Bryan told me that their flagship brand, Pullman Brown is in the 21st position in terms of most awards out of the GABF. They've got the props and creds. And maybe it's OK that capacity is so strained and there's a whole cache about finding and drinking a Flossmoor. You're never gonna find it at the Big Box Liquor discounters, but that's OK...the joy is in the hunt and the unanticipated discovery. 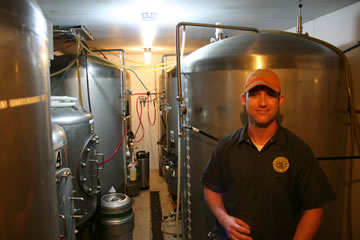 Bryan hangin' out in the cooler.

We had a ton of conversations on a wide variety of brewery and brewing topics. The scale of this two person operation really provided us great insight into the complete process... grain to keg. Down in the cellar, being some of the first to try Bourbon Barrel Aged Pullman Brown was the bomb. Bryan and Richard were the best hosts, and I gained a ton of appreciation for nuances of brewing and appreciated their perspectives on their profession. Good Luck and Good Brewing!