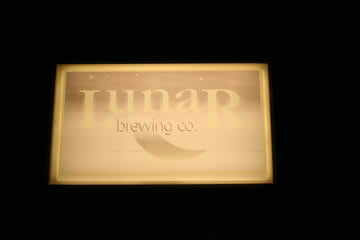 Lunar Brewing Co., which is a brewpub, is only about 15 minutes from work and that is in traffic. I actually noticed Lunar on the website for the seventh annual barrel aged festival that is going on in Chicago this weekend. Ther website is down but they have a facebook page that is all over place.

I noticed they were selling snifter glasses so I thought I would pick one up, try a beer, and hopefully get to see the operation behind the scenes. A phone call on Friday morning confirmed that they would give me a "three step" tour. I didn't know what that meant but I knew I would find out. 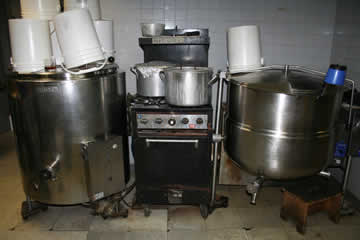 The brewpub is on the north-east corner of Illinois and St. Charles streets. It looks like an old town bar that now just happens to make beer. It is a long narrow building that has just the bar and a few bar tables for sitting.

Lunar beers that were on tap that night: Jumping Cow Cream Ale, Chateau de Lune, E.xtra S.tellar B.itter, Raspberry Cream, 162 Full Moon Illumnator, Total Eclipse Stout, Harvest Ale, Moodndance IPA. Let me correct myself, the stand up menus list these beers as I asked for a Moondance IPA which was not on tap, ending up with their Imperial IPA instead. Not only is the bar stocked with all of the beers that Lunar produces, there is a great selection of American craft beers and foreign craft beers in bottles. 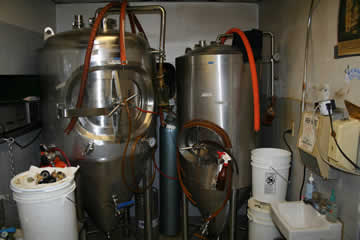 After finishing my first beer, the bartender took on the tour. Lunar doesn't really serve food (pizza, peanuts, pretzels, and popcorn is their menu) instead they have menus for your to order from local eateries and have it delivered. Why? Their kitchen is their brewery. I would imagine this space is maybe 10 feet by 10 feet and I might be a little gracious on my dimensions. Literally you can take the entire tour in three steps. I took big steps and made it in two :)

Brewing is a once a week process which is done in old industrial soup kitchen boilers. The capacity is about 4 - 5 barrels. These boilers act as the mashtun and the boiler for the wort. From there the wort goes into thier fermenters. They just purchased a nine barrel fermener recently to give them a total of three. The other two are only five barrel. The new fermenter gives them a chance to actually keep production up and a little bit ahead of demand in the pub. 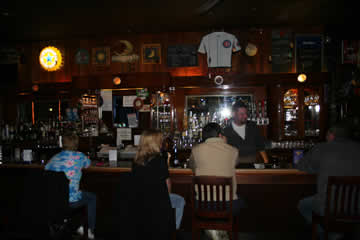 The math gives a yearly production of some 350 - 400 barrels. Not bad at all for a place that brews in its kitchen, is located in a neighborhood, and doesn't really have its own website. They do hae an area in which they do some bourbon barrel aging of several of their beers at different times throughout the year. Lunar produces a wide variety of beers througout the year to meet the seasonal changes, each seems to sell well.

I would like to go there during the day so I could find out a little more about the history of brewpub (current owner isn't the orignal), get a good shot of the outisde of the building, and try a few more beers. I would definitely recommend their Imperial IPA. For such a small operation they are doing a great job. Keep up the good work. Enjoy!